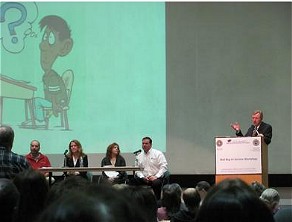 There's been a resurgence of bed bugs in the past 10 years. This growing problem can be attributed to a number of different factors: the loss of certain pest control products that coincidentally controlled bed bug populations; people traveling more; the use of previously-owned furniture, etc.

Bed bug control requires a fully integrated approach, as the bed bug is transient, nocturnal and elusive. Care must be taken to confirm proper identification, as other pests are similar in appearance and have quite different habits.

The bed bug problem is not going away. So Nassau County officials have taken a proactive approach to combat the infestation issue. And they're seeking a community partnership to accomplish it. A county-wide Bedbug task force, made up of officials from the areas of health, social services, senior citizen affairs, code enforcement, business owners, landlords, and members of the community, has conducted surveys of low-income housing properties, and held informational seminars for landlords and tenants.

The Task Force, co-chaired by Nassau County A.D.A Rene Fiechter and Bryan Matthews - Nassau County Health Department, held a Bed Bug In-Service Workshop at Nassau County Community College on January 10, 2011. More than 300 people gathered from over 15 organizations to discuss their common pest-control concerns. Fiechter started off the conference, describing it as a "quality of life issue," but one that is also associated with health concerns. He stressed that the most important goals of the Task Force was to focus on education, awareness, and creating cleaner and safer homes. District Attorney Kathleen Rice also gave a brief speech, stressing that rising bed bug infestations were a "nationwide public health problem," and that the reason why it has become so serious is because it affects everybody - rich or poor, old or young, no matter where you live.

Dr. Jody Gangloff-Kaufmann, part of the NYS Integrated Pest Management Program (IPM) at Cornell University, and one of the leading bed bug experts in the region, was there to teach the attendees essential information about bed bugs. She said the goal of her organization, IPM, and the task force, was to slow the spread of infestations by catching the problem early. They also want to bring the media into the issue, so they can raise awareness.

James Skinner from A&C Pest Management also spoke at the conference, and focused on different treatments that are available to rid your homes of infestation, as well as home-care products for do- it-yourself pest control.