Until the Sept. 11 memorial is completed at ground zero, Nassau County will be home to the largest monument in the United States marking the tragic events of that day in 2001. 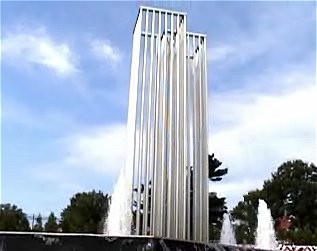 Last Sunday, two days before the sixth anniversary of the attacks, the memorial was dedicated before a crowd of thousands.

The monument sits across the lake from the Harry Chapin Lakeside Theater at Eisenhower Park in East Meadow. The theater often plays host to loud and energetic concerts, but on Sunday it was used for a more solemn occasion.

Ian Siegel, president of the Nassau County 9/11 Memorial Foundation, explained how much hard work went into creating the memorial, which features salvaged steel beams from the former World Trade Center. Hundreds of local laborers volunteered their time to build the monument, which Siegel said is so much more than the cement and granite on the surface.

"Underneath all that, mixed into the cement, is literally blood, literally sweat and literally tears," he said. "Those are the ingredients that make this memorial beautiful."

As they planned the memorial, Siegel said, there were arguments at times among committee members. But at no point did they lose sight of the work that had to be done, he said.

"Emotions were high on this project," Siegel said, "because everyone wanted to see it done right and knew how important it was."

The foundation raised $500,000 toward construction of the monument. The Nassau County Legislature voted to match that figure. Siegel estimated the overall value of the monument to be about $2 million. Donations ranged from $5 to $25,000, Siegel said.

"Many of those people still have ties to people living here," Siegel said, "and we felt it was only appropriate to include them on the wall."

Siegel said there is space on the last plaque for more names should the need arise in the future. He noted that every family was asked to approve how their loved one's name would appear on the wall.

As part of the ceremony, 22 family members read the names of all 344 people who perished that day. Ed Thompson of Valley Stream lost his son. "I think it's beautiful," Thompson said of the memorial. "It was a long time coming. They did a tremendous job."

Thompson's son was 44 when he died. He worked at Cantor Fitzgerald, a financial firm that lost 658 employees.

Thompson said it disturbs him to read or hear sentiments that it is time to stop hosting memorial ceremonies each year for those who died. He said Sept. 11 should be a day that is never forgotten. Thompson appreciates that this new monument will continue to keep the memory of his son alive, as well as everyone else who lost their lives that day.

"I think the county really went out of its way," he said.

Thompson's wife, Violet, said that when her sister next comes to visit, the first place she will take her is to the Eisenhower Park memorial.

County Executive Thomas Suozzi also paid tribute to the 344 men and women who have now been immortalized. They came from every walk of life, he said, and every one of them was a special human being. "Let this memorial carry the torch of their lives," Suozzi said.

Although the passage of time may have numbed raw emotions for the families, he said, the grief is still strong. Many memories were never made because of the events of Sept. 11. Daughters were married without their fathers to dance with. Children went off to their first day of school without their mothers to send them off. Suozzi wondered how different things would be if the attacks had never happened. "How many of those who we've lost would have changed our future?" he asked.

He cited the adage, "If you move one grain of sand, the world will never be the same."

The memorial committee reviewed 40 different designs for the monument, submitted by architects, artists, landscapers, county employees and schoolchildren. It was narrowed down to three, and the finalists were interviewed. Architects Philip Gavosto of Glen Cove and Keith Nicholas Striga of Valley Stream created the winning design.

"Each submission was beautiful and unique," Siegel said, "and all were worthy of being built at ground zero itself."

After the ceremony, victims' family members were invited around the lake to view the monument up close. Suozzi led the procession, which was serenaded by the Nassau County Police Pipe and Drum Band playing "Amazing Grace."