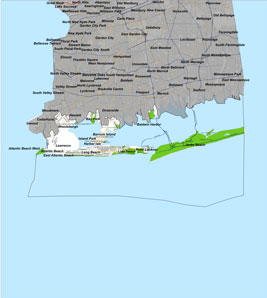 As a supporter of the environment, Legislator Ford works with the Western Bays Group which includes environmentalists as well as other government officials and has advocated for the necessary repairs and upgrades to the Bay Park Sewage Treatment plant which discharges into Reynolds Channel. She is also calling for an outflow pipe to be installed at the sewage treatment plant. Legislator Ford continues to advocate for the protection of the Lloyd Aquifer. She fought against the expanded usage of the Lloyd Aquifer by Suffolk County. Allowing another municipality to tap into our local water source would have impacted the aquifer's output capabilities, set a dangerous precedent for the future, and jeopardized the integrity and purity of the drinking water below.

Mrs. Ford is a member of the Groundwater Protection Project, a working group of elected officials from the state, county, and town level that will review and discuss information about our aquifers and how they are currently regulated in order to develop a common basis for understanding what is, and is not, happening to protect and manage Long Island’s drinking water supply; working towards a common-sense approach to regional groundwater management. She has sponsored a local law prohibiting the use of polystyrene foam containers in Nassau County.

In addition to her ongoing pursuit against underage drinking and her support of Tobacco 19 legislation, Legislator Ford served as a key figure in organizing the first and now annual Long Beach Suicide Prevention Walk, "Let's Walk Let's Talk", to support the Long Island Crisis Center's 24-hour intervention hotline and suicide education. In appreciation of her efforts, the Long Island Crisis Center honored her.

Legislator Ford is similarly proud of the work she has done to help make "Art in the Plaza" a reality in the City of Long Beach. This event provides a venue for local artists and musicians to exhibit and perform their art for everyone to enjoy. Mrs. Ford also helped bring the first farmers market to the City of Long Beach. Located at Kennedy Plaza, the farmer's market features vegetables, plants, flowers, fruit, juices, preserves, eggs, honey, cheese, and artisan bread that are grown or made locally. It's a great way to eat healthy, and to give back to the local economy.

Legislator Ford has worked tirelessly to make sure residents are prepared in case of a hurricane or emergency and hosted forums to educate residents on ways to safeguard themselves against harm. She has also held Bicycle Helmet Safety Day, where she along with the Traffic Safety Board distributed hundreds of bicycle helmets free of charge to residents both young and old alike. While working together with the Nassau County Department of Assessment Mrs. Ford conducts numerous meetings throughout the year to help senior citizens save money on their Nassau County property tax bill and school tax bill. The meetings are designed to assist in understanding the various tax reduction programs such as the Senior Citizen Property Tax Exemption Program and the Enhanced Star Program.

During her term in office Mrs. Ford has been honored for numerous achievements within her community for serving her constituents. In the past she has received the Big Sister award from Project Challenge for her untiring efforts to better her community. She was also named Woman of the Year by the Long Beach Chamber of Commerce in recognition of the exceptional leadership she has given for her constituents. Additionally, Legislator Ford was honored as Woman of the Year by the Michael Valente Lodge. She was again honored as a "Woman of Valor" by the Sisterhood of Temple Emanu-el. Legislator Ford was honored in Albany as "Woman of Distinction" for her outstanding achievements and contributions which have greatly enriched the quality of life in her community and beyond as well as a role model for all of us. Legislator Ford was honored by the Arthritis Foundation at their annual fundraising breakfast, received the Americanism Honor from the American Legion Long Beach Post No.972, "Extra Step" Award from the Long Beach Landmarks Association, and the Beach to Bay Civic Association Woman of the Year Award.

Legislator Ford has been a resident of the Long Beach community for over 35 years and has long been active in her West End neighborhood. Mrs. Ford stepped down as the President of the West End Neighbors Civic Association to assume her role in the Legislature. She is currently a member in a variety of organizations such as the Ladies Ancient Order of Hibernians, Ladies Auxiliary of the VFW and Kiwanis. In addition, Mrs. Ford retired from the telephone company in 1999 after 25 years of loyal service as both a technician and a shop steward in Locals 1101 & 1106.

Legislator Ford was raised in a family dedicated to public service. Her father was a retired member of the New York City Police Department and her mother worked for many years with the United States Customs Department. She is the proud mother of three wonderful children, Janna who is a Special Education teacher, Janna & her husband David blessed Mrs. Ford with a grandson Jacob and a granddaughter Aggie. Harry, graduated from the FDNY Academy and is following in his father's footsteps as a New York City Fireman, and Gerard, married to Colleen, is continuing his grandfather's legacy as a New York City Police Officer. Legislator Ford and her family have had to cope with enormous tragedy, Mrs. Ford's husband, Harry, a decorated; 27-year veteran of the New York City Fire Department was killed along with two of his fellow firefighters at a fire in Queens on Father's Day 2001. Legislator Ford's story has turned from one of tragedy to one of strength and inspiration.