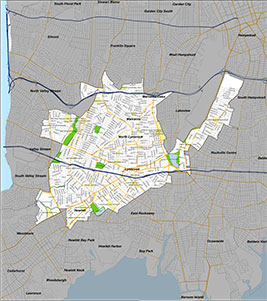 C. William Gaylor, III (Bill) retired from the United States Army as a Lieutenant Colonel, after serving more than 23 years on active duty. His last assignment was as the Professor of Military Science at Hofstra University and Battalion Commander of the Long Island Reserve Officers Training Corps (ROTC) Program.

Bill is a practicing attorney, a former Nassau County Traffic Court Judge, and is the former Lynbrook Village Associate Justice having served in that position for more than six years. Bill stepped down as Judge to run as a Legislator and was first elected in November 2015, and has been re-elected in 2017, 2019, and 2021 to represent the 6th Legislative District which includes Lynbrook, Malverne, North Lynbrook, Valley Stream and portions of Rockville Centre, Hewlett, Franklin Square and Woodmere.

Bill enlisted in the Army, was promoted to the rank of Sergeant and attended Army Officer Candidate School. He received his Commission as a Second Lieutenant in the Quartermaster Corps. Lieutenant Colonel Bill Gaylor has commanded at all levels from platoon to battalion and has served stateside as well as overseas, with tours of duty to Korea, Germany (two tours) and two combat tours in Panama and Kosovo. While assigned to NATO with the Allied Command Europe Mobile Land Force he served as NATO's Host Nation Support Officer responsible for providing logistical support to an international force of more than 15,000 soldiers and marines, while serving on exercises in Poland, Hungary, Greece , Turkey, Norway, Slovenia, Albania, the Former Yugoslavian Republic of Macedonia and Italy.

Bill is admitted to practice law in the State of New York, the Federal District Courts within the Eastern and Southern Districts of New York, the United States Court of Appeals for the Armed Forces, and the United States Supreme Court in Washington D.C. He maintains his own law practice in Lynbrook, New York, providing a variety of legal services in the areas of civil litigation, including family and matrimonial matters, criminal, personal injury claims, real estate transactions, wills & estates, landlord/tenant disputes, contracts and business matters.

He and his wife Deborah reside in Lynbrook, New York.