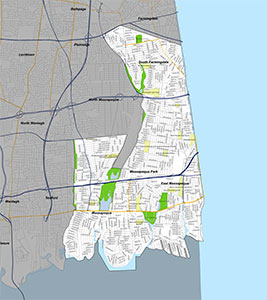 James D. Kennedy is a lifelong Long Island resident and a graduate of Fordham University. James was first elected in a special election in February 2015 to serve the 12th Legislative District and was re-elected by a wide margin in November 2015, 2017, 2019 and again in 2021. Before serving as a Nassau County Legislator, James worked as a fifth grade teacher at Holy Child Academy.

James is a member of the Massapequa Historical Society, the Knights of Columbus, the Sons of the American Legion, the Massapequa Lions Club, Sons of AMVETS Post 88, the Friends of the Massapequa Preserve, catechist and member of St. Rose of Lima Church and a social member of the Sons of Italy. He is an officer of the Peter J. Schmitt Memorial Foundation, which raises funds for local community organizations. James' parents, both of whom immigrated to the United States from Ireland in their early twenties, instilled in him strong values and a hard work ethic.

James continues to fight to ensure that property taxes do not increase and works hard to build a stronger economy that brings well-paying jobs to Nassau County. He also continues the fight to eradicate the drug problem that threatens our neighborhoods to make sure our quality of life continues to improve.

His father-in law, the late presiding officer of the Nassau County Legislature, Peter J. Schmitt, inspired and encouraged James' interest in local government, and James will continue Peter's legacy of fighting for the people of his community. James is married to Samantha and they live in Massapequa with their children Logan and Emma. In addition to his Bachelor of Arts degree from Fordham, James also holds a Master of Fine Arts from Brooklyn College of the City University of New York and a Master of Science in Childhood Education from the C.W. Post Campus of Long Island University.