This 22-acre freshwater preserve provides a peaceful setting of woods and water, along with a series of brief trails, some of which are covered with boardwalks. The woods feature red maple, white oak and cherry trees, along with numerous bird species such as the wood thrush and tufted titmouse. The pretty Milburn Creek meanders through the preserve, offering clear water and a sand and pebble bed. On the south side of the preserve the 19th-century red-brick Brooklyn Water Works building is visible (that property is privately owned).

HISTORY: In 1988, Nassau County joined with the South Shore Audubon Society to save this ecologically sensitive parcel of land from development and establish it as a public nature preserve. In the spring of 1989, the County repurchased the land, designated it as a perpetually preserved greenspace, and contracted with South Shore Audobon for management.

The preserve itself is a parcel of natural woodlands and fresh water wetlands. Upland woods and a small successional field provide a home for many resident birds and other animals, while freshwater wetlands provide resting and nesting sites for many migratory birds, as well as a wide variety of resident animals.

The history of the property dates to the late 17th century, when John Pine received permission to operate a grist mill at Milburn and Merrick roads. At that time, the creek that runs through the preserve was dammed to form the body of water known today as Milburn Pond. In the 1880s, this property, along with several other Long Island streams, was purchased by the City of Brooklyn to supply water to its growing population. 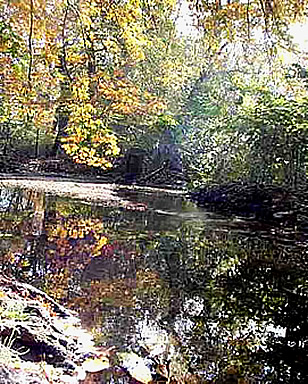 The Brooklyn Water Works Building, which stands just south of the preserve, was constructed from 1889-91 according to a plan by a well-known Romanesque architect of the time, Frank Freeman. Water was supplied via a conduit to Brooklyn from 1891 until the mid-1950s, when New Yotk City began relying solely on the reservoirs in the city's northern suburbs.

Known as the "community bath" during the 1930s and 1940s, the preserve's Milburn Creek was a popular gathering spot for local residents who swam and played at the creek. In 1957, Nassau County began negotiations to buy the property from New York City, with the purchase finally taking place in 1980. In 1986, the county sold the property to a Long Island developer before repurchasing the land three years later.